Welcome to the Adult Services page of the Lower Providence Community Library website.  Find upcoming Programs & Events, check out our Resources for Readers, and send us your recommendations for books, DVDs, and other materials you would like to have in the library.  Also, please let us know if you have any ideas for programming. We would love to hear from you!

To register for programs, email Barbara Loewengart or call the library at 610-666-6640 for the Circulation Desk.

Chair yoga (gentle yoga for people with less mobility) taught by certified yoga instructor Kamini Patel via Zoom on Tuesdays at 2:00 pm and Thursdays at 4:00 pm.

Please join us for FREE meditation sessions. Open to all levels. Bring your active mind and wear comfortable clothing.

On Wednesday, November 18 at 7:00 pm, we will be discussing via Zoom The Keepers of the House by Shirley Ann Grau.  Please email Library Director Marija Skoog at mlskoog@mclinc.org for Zoom credentials.  All are welcome!

Winner of the Pulitzer Prize in 1965, The Keepers of the House is Shirley Ann Grau’s masterwork, a many-layered indictment of racism and rage that is as terrifying as it is wise.
Entrenched on the same land since the early 1800s, the Howlands have, for seven generations, been pillars of their Southern community. Extraordinary family lore has been passed down to Abigail Howland, but not all of it. When shocking facts come to light about her late grandfather William’s relationship with Margaret Carmichael, a black housekeeper, the community is outraged, and quickly gathers to vent its fury on Abigail. Alone in the house the Howlands built, she is at once shaken by those who have betrayed her, and determined to punish the town that has persecuted her and her kin.
Morally intricate, graceful and suspenseful, The Keepers of the House has become a modern classic. (From Book Movement.)

Discuss the importance of land and nature in the novel. To what extent are William and Margaret both creatures of nature?
What is William Howland’s view of race relations?
Describe the Howland farm. What were some of its uses over the generations?

What do you think it meant when William Howland merely expressed that he “wasn’t surprised” with the news of Abigail’s marriage?

Compare and contrast Margaret, the woman who raised Abigail like a daughter, to Abigail’s birth mother (Abigail Howland)?

Do you think Abigail’s grandfather would have been proud of her final actions in the book? Why or why not?

Discuss the emotional climate of the southern United States during the time of the novel.

Using examples, describe whether or not you feel Margaret was a good mother to her children.

Why did the Tollivers and Howlands not get along despite their familial bonds?

Is Abigail’s vindictiveness in the last section an appropriate defense? Is she a successful keeper of the house?

September –  Transcription by Kate Atkinson
October – An American Marriage by Tayari Jones
November – Where’d You Go Bernadette by Maria Semple
December – Girl in Translation by Jean Kwok
January – The House of Broken Angels by Luis Alberto Urrea
February – My Sister, the Serial Killer by Oyinkan Braithwaite
March – Homegoing by Yaa Gyasi
April –
May – Snow in August by Pete Hamill
June – Empire Falls by Richard Russo
July – The Starless Sea by Erin Morgenstern
August – The Nickel Boys by Colson Whitehead
September – The Last Romantics by Tara Conklin
October – Say Nothing: A True Story of Murder and Memory in Northern Ireland by Patrick Radden Keefe
November – The Keepers of the House by Shirley Ann Grau.


Register For The Evening Book Discussion

On Tuesday, November 17 at 12:30 pm, we will be discussing via Zoom The Yellow Bird Sings by Jennifer Rosner. Please email Reference librarian Barbara Loewengart at bloewengart@mclinc.org for Zoom credentials.  All are welcome!

In Poland, as World War II rages, a mother hides with her young daughter, a musical prodigy whose slightest sound may cost them their lives.

As Nazi soldiers round up the Jews in their town, Roza and her 5-year-old daughter, Shira, flee, seeking shelter in a neighbor’s barn.
Hidden in the hayloft day and night, Shira struggles to stay still and quiet, as music pulses through her and the farmyard outside beckons. To soothe her daughter and pass the time, Roza tells her a story about a girl in an enchanted garden:
The girl is forbidden from making a sound, so the yellow bird sings. He sings whatever the girl composes in her head: high-pitched trills of piccolo; low-throated growls of contrabassoon. Music helps the flowers bloom.
In this make-believe world, Roza can shield Shira from the horrors that surround them. But the day comes when their haven is no longer safe, and Roza must make an impossible choice: whether to keep Shira by her side or give her the chance to survive apart.
Inspired by the true stories of Jewish children hidden during World War II, Jennifer Rosner’s debut is a breathtaking novel about the unbreakable bond between a mother and a daughter.
Beautiful and riveting, The Yellow Bird Sings is a testament to the triumph of hope—a whispered story, a bird’s song—in even the darkest of times. (From the publisher.)

1. What is the significance of Shira’s bird? How does it aid her? Do you think its original color, yellow, is important or telling? In what ways does the bird’s evolution mirror or not mirror Shira’s?

2. In the barn, Roza has to keep Shira—five years old and a musical prodigy—silent and still. What are her most effective strategies? Do you think she would have an easier time if Shira was younger or older?

3. When Roza asks Krystyna outright why she is helping them, Krystyna responds, “In God’s eyes your child is no different than mine. She deserves every chance to live. “What are Krystyna’s motivations for harboring Roza and Shira and, later, for arranging Shira’s transport to the convent? Do you think Krystyna knows of Henryk’s advances on Roza? If so, why doesn’t she send Roza and Shira away sooner?

4. How would you describe the relationship between Henryk and Roza? Does it change over time? From our twenty-first-century perspective, would we call it rape? Would Roza? Do you think she has any agency in their relationship? Is it still possible to think of Henryk’s decision to protect Roza and Shira, despite the risk, as heroic?

5. Judaism is fairly absent from the novel, despite it being the reason Roza’s and Shira’s lives are in danger. Why do you think that is the case? Why does Roza rarely reference her religion?

6. In the barn, Shira eats her own portion of food and whatever her mother saves for her. She also eats the special foods Krystyna gives her on outings. How does hunger, satiety, and the storing of food play out later, specifically with regard to her feelings of guilt?

7. In the convent, Zosia is permitted to speak but stays largely silent. As she grows more comfortable playing the violin, she comes to think of the sound as “safer even than silence.” What does the author mean by that phrase? Discuss the importance of music in the novel. What can music express that words (or silence) can’t?

8. Although the nuns dye Zosia’s hair and teach her Catholicism, she still feels like an outsider. Discuss the various ways in which the girls, the nuns, and Pan Skrzypczak treat her otherness, and the forms of prejudice and kindness she encounters. Do you think they suspect that she is Jewish?

10. At the camp in the woods, Roza is heartbroken to realize that other families remained intact: “Here are mothers, in the woods, in winter, who did not part from their children. They kept them with them and their children survived.” Do you think she still made the right decision in sending Shira away? What would you have done in her place?

11. Roza cannot bear to hold Issi, a young child at the camp. Issi’s mother doesn’t understand, and the narrator explains, “What is whole does not comprehend what is torn until it, too, is in shreds.” Do you agree that there is an inevitable limit to our empathy? Can novels like The Yellow Bird Sings expand our capacity to empathize? If so, how?

12. Over the course of the novel, Shira becomes Zosia and then Tzofia. What does she lose with each name change? In her author’s note, Jennifer Rosner rites of the hidden children who inspired her novel:

If you remember me, if there is anyone out there who recognizes me and can tell me about my family, my name, then I might discover my history, my roots: my self. For refugees of current wars and violence, children displaced and torn from their families, this question echoes on.

—Do you agree that Shira’s experiences continue to resonate today, with the global refugee crisis?

13. Why do you think Roza decides not to try to have more children once she moves to America? Do you think that was a selfish decision? Was it fair to Aron to keep it from him, or does she have the right to make that choice for herself?

14. What did you think of the novel’s ending? Do you believe that Shira and Roza will have a future together?
(Question issued by the publisher.) 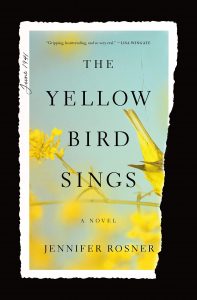 A Different Kind of Book Club


A Different Kind of Book Club focuses on reading books with happy endings (romance, light fantasy, cozy mysteries and the occasional nonfiction). New members are welcome.
On Tuesday, November 17 at 7:00 pm, the club will be discussing Sweetness of Forgetting by Kristin Harmel. Meets on the 3rd Tuesday of each month. All are welcome to join. Please email Debra Duffy at deblrduff@gmail.com to receive a Zoom invitation or for more information.

Register For A Different Kind of Book Club

Learn some time-saving tips and hacks for holiday baking.  Bake along via Zoom with Kathy Wolper, owner of Kitchen Wizards. Recipes and ingredient lists will be provided when you register as well as Zoom credentials for the day of the program. Baking is a great way to get in the holiday spirit! Registration limited to 20 participants.


The Memoir Writing Circle, which under normal circumstances would meet in person at the library, is now sharing their writing via Email. Once a month a member of the group offers a writing prompt.  Each member submits their piece to the group by a specified deadline and everyone offers each other supportive feedback. Submitting a piece each month is not required, but definitely encouraged. Please contact Kathy Thomas at k3Thomas@yahoo.com for more information or to become part of the group.

Join writers in finding their voice through memoir writing. The group will use writing prompts, poems, journal entries and images to discover the compelling themes and stories that comprise a memoir. Suitable for writers of all levels and experience.

Do you have questions about Medicare? Need assistance with what Medicare options are available? Need to know what plan is right for you? Please call 610-834-1040 ext.120 to discuss your Medicare concerns and questions with an APPRISE counselor. APPRISE is a program funded by the Pennsylvania Department of Aging and other agencies designed to help Medicare beneficiaries understand their Medicare and health choice options.

Register For New to Medicare

My Account
Get our Newsletter
Become a Member
Support the Library